to recover the crash which last week could bit coin course, overcome the existing since early January downtrend and 6.992,00 euro rise up to date on. It must however show whether this upward trend can be kept on. 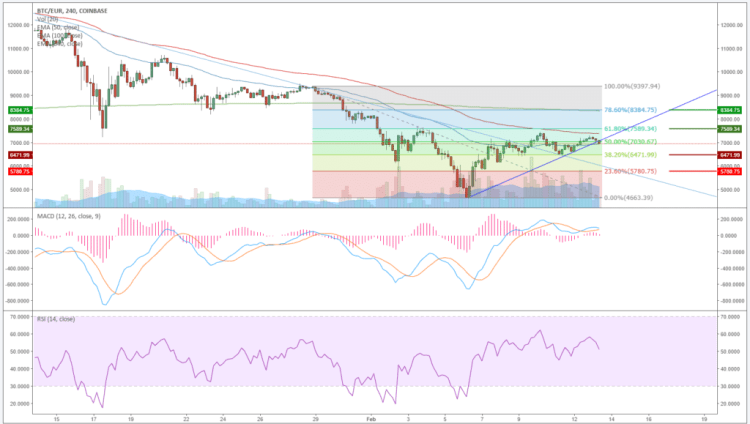 After course quake the last week of the course could recover again: two days he rose from 4,860 euros to around 6,700 euros. Unfortunately, the price fluctuates since February 8 by this value. He could get up to 7,400 euros, however, the EMA100 remained an impenetrable resistance. It is however positive that the sustained since 6 January downtrend could be overcome and we perceive the beginning of a new upward trend but currently being tested.

(second panel from the top) MACD is above zero, but the MACD line (blue) currently falls under the signal (orange).

RSI is located at 49 and is thus neutral.

Overall the situation according to course and trend indicators is neutral . It is interesting to consider how the course currently behaves on the support of the uptrend.

The most important support corresponds to the 38.2-%-FIB retracement-level (regarding the Kursfall between 28 January and 6 February) at 6.471,99 euros. Falling under this resistance would end the upward trend coming into being. A more important resistance is described by the 23.6% FIB retracement level, which is re-entering the old downward trend in the way.

The most important resistance is formed by the 61.8% FIB retracement level at 7.589,34 euros. Breaking through this would the course again on the EMA100, so that we could hope for a sustainable upward movement. A more important resistance is described by the 78.6% FIB retracement level, which is approximately 8.384,75 euros at the height of the EMA840. This exponential moving average corresponds to the EMA20 in the weekly chart; some time ago, the role of this long term support clarified accordingly, increasing this value for a sustainably positive share price development would be useful. 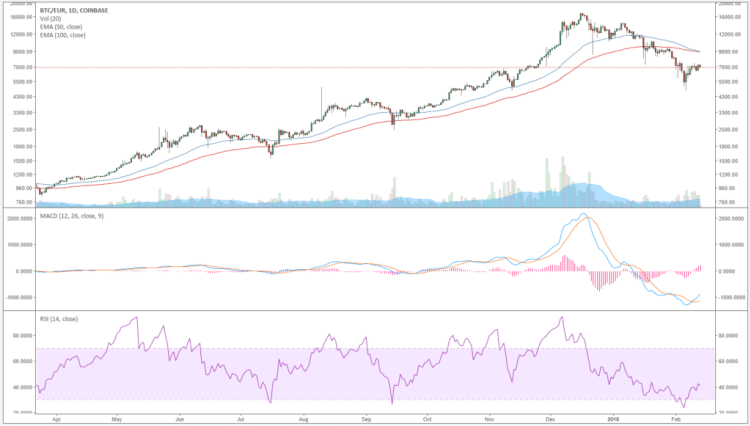 In the wake of recent price developments. First to the negative: the currency crash has now ensured that the course is in the longer term fallen below EMA50 and EMA100 who make now a death cross, what is commonly seen as a sign of a sustained negative price development. Positive however is that a turnaround is underway according to RSI. Like on the dips mid-July and mid-September recognizable a turnaround occurred, after falls of RSI in oversold sectors. In this respect, there is reason to hope that it is now back up!

images based on data by coinbase.com at 09:00 on 13 February created