Over the past 12 months the BitMEX Insurance Fund grew to almost 33.5k BTC, representing a 62% increase from the 20.77k BTC it held at the start of the year. This means that 0.18% of all bitcoin so far mined is now in the fund, up from 0.15% in August as Bitcoinist reported at the time.

Total BTC Held By BitMEX Goes up To 400k

CryptoQuant then looked at the total amount of bitcoin held by BitMEX. This is now over 400k BTC, or more than 2% of the current total supply.

CryptoQuant suggested that this represented growth of over 500% this year, although the chart presented along with this statistic would seem to disagree. It seems more like a rise from around 240k BTC to 440k BTC, or growth of around 83% during the year. 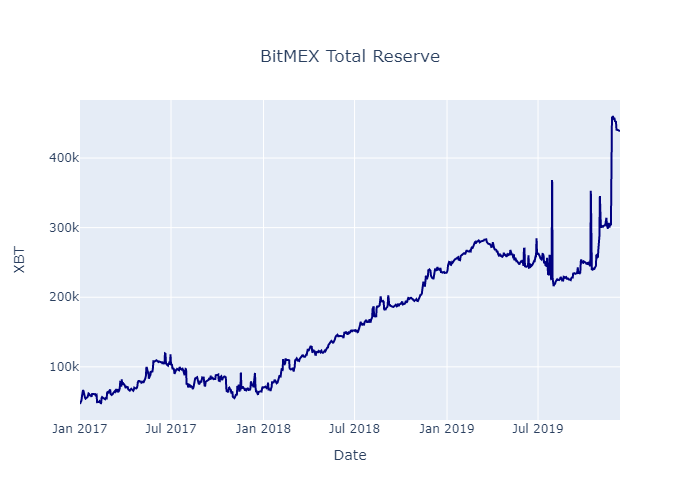 Combining the charts gave a ratio of what proportion of BitMEX’s total BTC reserve was held as part of the insurance fund.

In August this rose to be as high as 14%, although in the latter part of the year, this proportion dropped back to around 7.5%.

A fluctuation in this ratio is to be expected, as the insurance fund covers unfilled liquidations before they are taken over by BitMEX’s auto-deleveraging system. As the funds held were used in this manner on several days, it would suggest that the system works well.

However the peak of 14% would seem to be more of an anomaly than an expected outcome, due to the timing. The month before the August peak saw a mass exodus of funds from BitMEX, following an alleged probe into the firm by the Commodity Futures Trading Commission (CFTC).

Supposedly the CFTC were to investigate whether US citizens were circumventing measures to stop them from using the service.

As Bitcoinist reported, back in January the BitMEX insurance fund held enough BTC to fund a 51% attack on Bitcoin Cash for an entire year. By now we are looking at 19 months and counting.

Do you think BitMEX’s insurance fund is sufficient? Add your thoughts below!

Images via Shutterstock, chart by CryptoQuant

Posted in Thai and tagged bitcoin